Ned and his Friends Slots 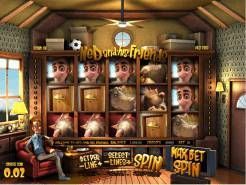 Play Now
Excellence, interactivity, and superb are but a few superlatives to describe Betsoft’s games. And their reputation remains fully intact when it comes to their popular slot title, Ned And His Friends .

About Ned And His Friends Slots

This interactive, state of the art video slot, comes in five reels with 30 pay lines. This relaxing, light hearted game, follows Ned, a young man who is surrounded by his best friends, furry rat friends to be exact, in his home. The symbols in this game reflect the world of the rats and their environment. It’s important to note that there is no wild symbol in this game. The scatter symbol consists of the white rat. Getting three of this icon to land, will trigger the singing rats, free spins round. In this round, you will start off with 5 free spins. This bonus round features charming, singing rats as you rack up wins. This feature can be re triggered, provided that you land an additional three on the pay line. The second bonus round is the click me feature. It takes landing at least three rat tails to start this round. In this round, you will be presented with several rats. Choose your preferred rat, to reveal your prize. Not to be overlooked is the girlfriends bonus round. The key to entering this lucrative round, is landing three of Ned’s girlfriend symbols on the reel. Time is of the essence while playing this round, for when Ned’s girlfriend enters the apartment, she passes out from the smell of the rats. You must wake her up in a specified time to earn winnings. The faster you wake her up, the greater the pay out. The other symbols in this game, are Ned himself, the door, and various rats. The key is to land three of a kind of an icon to score a winning combination. Ned is the highest paying symbol. Getting five of him to land on the reel, will result in 500 coins. And while you spin the reels, Ned will casually walk around the house, and the rats will sing and play. Ned And His Friends, gives players the option of placing their own bets, or have them play out through auto play mode. There is a menu button where you can adjust game settings and review winning combinations.
Play Now