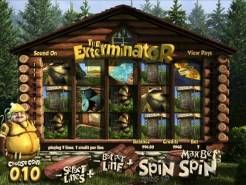 Play Now
The Exterminator is a friendly and cuddly man who works hard on getting rid of unwanted raccoons and other unpleasant creatures that roam the streets of the city. Alvin is introduced to players with a colorful little movie and from then on he sits at the side of the screen and gives comments and directions on how to boost winnings and get the best from this game. The characters and symbols in this game are all 3D and it adds to the fun atmosphere that is given making it a pleasant and enjoyable game to play.

Alivin and His Winning Options

Every time the player lands a win, the winning symbols stay in place and the player is treated to a further re-spin. The wild truck symbol that only appears on reel 4 can also stick when appearing giving the player more chances to win. Five of the footprint symbols award the player the great raccoon free spins games where every win can result in an increasing multiplier that reaches a limit of 5x and is applied to all the winnings earned for the free spins games. Five of the blueprint symbols awards the player a chance to play the bonus game where he chooses the position of the raccoon on the streets and depending on the position chosen, the player can win certain payouts. At the end of every winning spin the player has the option of choosing the double up feature where he can guess the color of a card to be turned over in order to try and double his winnings a few times but beware that an incorrect guess loses the winnings for that spin. Alvin is good at his job and the smelly raccoons soon disappear in this comical and fun slots game.
Play Now