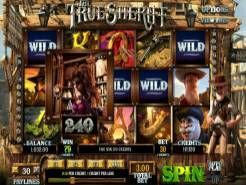 Play Now
The Wild West was always a place of action and even more so in this colorful 3D slots game that has five reels and thirty paylines. Players may try out the game for fun before placing real money bets using a variety of coin sizes and betting up to $75 per spin. The game includes some great bonus features delivered by the many different colorful symbols of the game that include the cowboy, villains, the cowgirl and a sheriff.

Wild Guns and Wild Wins with Lots of Extras

A gun on reel 3, the middle reel will trigger the special wild guns feature. During the wild guns feature players will see a shoot out occurring that will give the player up to 5 new wilds on the screen that are active for re-spins giving him some nice payouts. The gun between sheriff and the bad guy on reels 1, 2 and 3 triggers the bonus round in which each shoot out win brings the player closer to the big payout but each loss will take him further away. Free spins are triggered when three and more of the scatters appear on the screen in addition to a bonus scatter payout. Three of the scatters awards players 60 coins and 10 free spins, four awards the player 12 free spins and 300 coins and five awards the player 15 free spins and 3000 coins. During the free spins players collect badges that are counted up at the end of the run of free spins and the number collected will reveal a special bonus for the player. There is also a double up gamble feature that is optional and offered at the end of every winning spin. The gamble feature allows the player to guess the color of a card that is to be turned over. A correct guess wins the player double his amount but an incorrect guess loses the amount for the player. This game is fun, wild and rewarding.
Play Now